Sherco USA’s Pat Smage took a pair of wins at rounds three and four of the SWM US National MotoTrials Series in Sedan, Kansas this weekend, extending his lead in the championship standings to 14 points over Spaniard Marc Freixa, who was second on both days.

The Kansas event featured technical sections with massive sandstone ledges, which the riders were sent up, down and around. Though the event was a bit tougher than last week’s event in Texas, it was still a relatively low-scoring trial for the top riders.

Smage was steady and precise on Saturday, needing just two single dabs to navigate the entire 12-section, three-lap event. His first dab came in section five of the first lap when he got off his line and got too close to the edge of a drop off, forcing him to take a dab to correct his line. After that, the Wisconsin rider proceeded to clean the rest of the event until the final section of the day, where he took a dab on the take off to the massive wall at the exit.

“There was a lot going on in my head by the time I got to the final section,” said Smage. “I wasn’t sure how many points Marc had and there was a lot of pressure on me. When I was setting up for the wall, I didn’t have my balance and I didn’t have enough speed when I took off so I had to take a one at the top to push the bike over the top of the ledge. It could easily have been a five so that was my best option.” 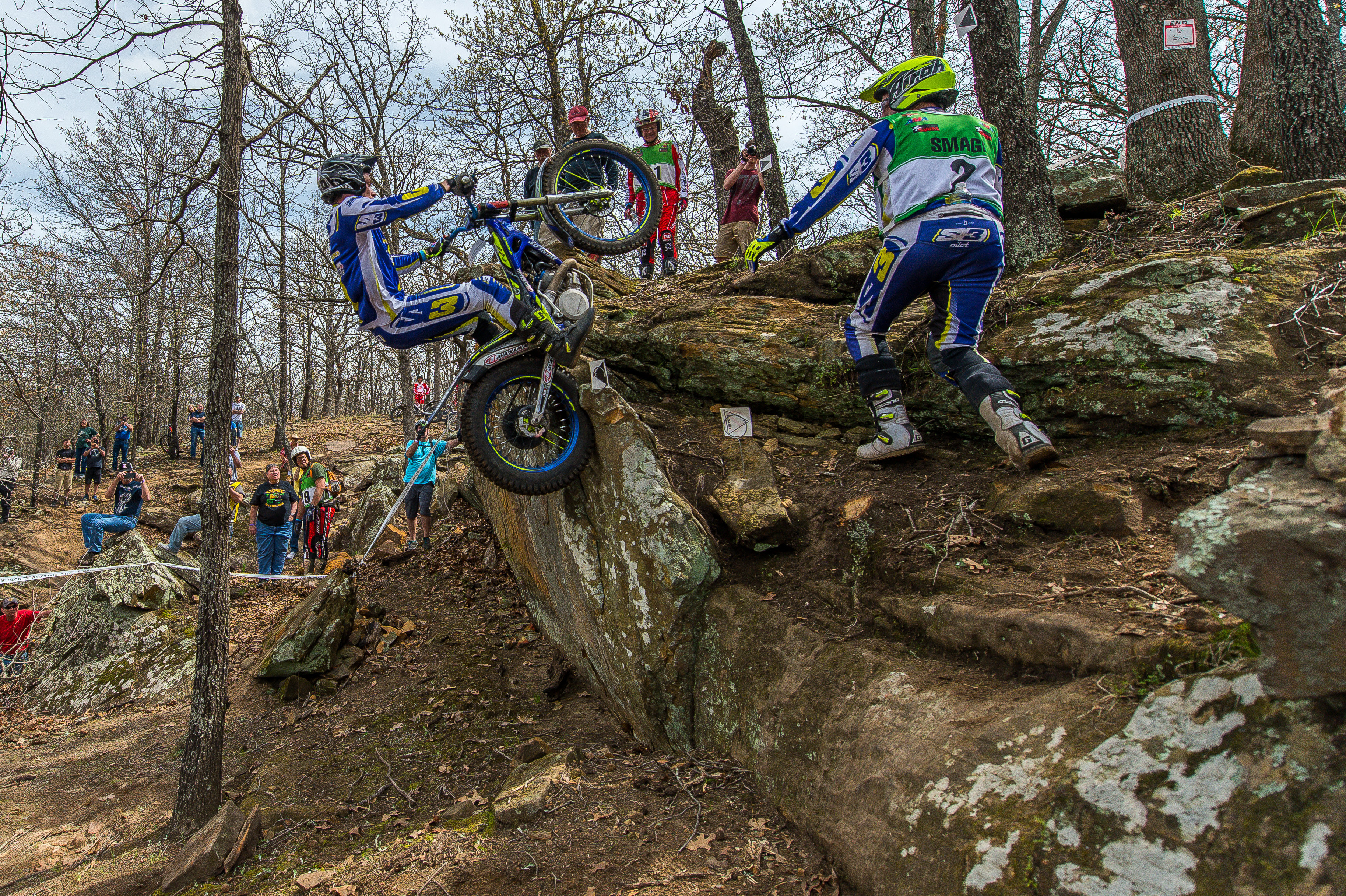 Smage’s one on 12 gave him two points total for the day, which was more than enough to claim his second win of the series.

“I’m pretty happy with how I rode, and although the sections were more technical than last week, I was still able to keep my mistakes to a minimum and turn in a low score,” said Smage.

Freixa ended the day in second, the Montesa USA rider finishing with a total of nine points. Freixa kept Smage honest for most of the day, taking two points on each of the first two laps, however, any chance to catch Smage for the win went out the window on the final lap when the Freixa ran his front wheel out of the boundary in section seven for a five.

“Smage rode very well and I just made too many mistakes,” said Freixa.

“That five in section nine hurt the most,” said Roper. “I was clean all the way until the end and I didn’t make the splatter at the end. It was a silly mistake and it more than doubled my total for the lap.”

Sherco USA’s Andrew Putt was fourth after turning in loop scores of 13, 2 and 5 for a total of 20. Meanwhile, Scorpa USA’s Karl Davis Jr. rounded out the top five with a total of 28 points.

Sunday’s event was much tighter between Smage and Freixa. Smage took the initial lead when Freixa took a dab in section seven on the massive exit wall. This turned out to be a controversial section because the riders decided not to ride it the way it was originally set up, which included a 12-foot vertical wall. The markers were eventually moved over to a shorter section of the wall (only eight feet!), which wound up being more manageable.

Smage cleaned section seven on his first pass, but took a one on his second trip through. He also took a dab in the loose rocks at the bottom of section 10, giving the Sherco rider two points to Freixa’s one heading into the final lap.

Smage managed to clean the entire final lap, and Freixa got through the tricky wall in section seven clean, but then took a dab in section 10 on the final lap in almost the same spot that Smage dabbed on the first lap.

Both riders finished the trial with a total of two points, but since Freixa took a point before Smage did (in section seven of the first lap), the win was awarded to Smage.

“It feels good to come out of here with a pair of wins, especially getting wins over Freixa,” said Smage. “When I took that dab in section 10 I thought it was all over with, but then I saw that Freixa came in on his final lap with a one in 10 and I couldn’t believe it.”

Roper and Putt once again battled over third place, with Putt getting the final step of the podium this time with a total of 10 points, including an impressive clean final lap.

“I was plagued by four individual points on my first lap, just small mistakes, but I was able to correct them on my second loop,” said Putt. “I was actually on a one-point loop up until section 11 where I made a big mistake and got a five. I was able to get my head back together and I finished off the day with a clean loop my third time around.”

Roper admitted to being off his game on Sunday and finished fourth with a total of 19 points, while Karl Davis Jr. was fifth with 31 points.

After four rounds, Smage now leads the SWM US National MotoTrials Series standings with a total of 115 points. Freixa sits in second place with 101 points, while Putt is third with 85 points. Roper sits fourth at 75 followed by Davis in fifth with factory Gas Gas rider Alex Niederer in fifth with 60.

The SWM US National MotoTrials Series resumes action on June 17-18 in Cleveland, Ohio. For more information go to www.mototrials.com.