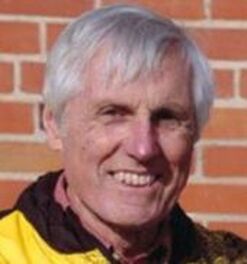 Bill Brokaw was a leading competitor and lifelong supporter of motorcycle trials competition.  He helped foster trials in Southern California as a champion rider and later as an organizer in the 1950s.  In the 1960s, Brokaw moved his motorcycle dealership and family to Colorado and helped form the Rocky Mountain Trials Association.  He also became a member of the North American Trials Council, the organizing arm of trials competition in America.


Brokaw was born in Waterloo, Iowa, in December of 1932.  His family owned a motorcycle dealership and as a boy, Brokaw grew up riding stuffed between his parents on their Harley-Davidson.  He began riding himself at age 13 when he got a BSA 250.


“I remember when the first BSA brochures came over after the war,” Brokaw said.  “There was this 250 and the specifications of a 28-inch seat height caught my eye.  I got out a tape measure and realized that I might be able to straddle the motorcycle.  At that point I was a very enthusiastic potential owner.”
Brokaw got the little BSA and learned to ride the bike in Iowa cow pastures.


Soon after, his father was offered the position of editor for Motorcyclist magazine and the Brokaws moved to Los Angeles in 1947.


Southern California in the late 1940s and early 1950s was a dream for a young motorcyclist like Brokaw.  He was able to get a restricted license and rode all around the Los Angeles area.  He joined the Pico Hornets Motorcycle Club and club members were kind enough to restrict their activities in order to let Brokaw and his little BSA, which topped out at 45 mph, participate.  When he turned 16, he got a 500cc AJS and the club members no longer had to wait around for Brokaw.


During the 1950s, Southern California had dozens of motorcycle clubs and most riders of the region were members.  This was in the era before specialization and riders competed in all types of events from TTs, to hare and hounds, to scrambles and trials.  Nearly all of the clubs held competitions, and Brokaw found he favored trials.  He learned to balance his bike over the tight and precarious courses and before long he began winning.  Soon Brokaw had the reputation as the leading trials rider in Southern California.


“I remember when I finally beat Nick Nicholson,” Brokaw recalled. “I felt like I had the world by the tail.”


Brokaw won the Southern California Trials Championships in 1951 and 1952 and was one of the youngest competitors of the time.  He also raced in many of the classic off-road events of the day, such as the Catalina Grand Prix and Big Bear.  Brokaw once won the Gavilan Mountain Hare and Hound by 20 minutes.  He was part of the throng of riders taking to lightweight, British-built machines for off-road competition, leaving the era of the big Harley-Davidson and Indian off-road machines in the dust.


One of Brokaw’s most vivid memories of this time was competing hare and hound races held at night!

​
“The Lucas headlights on the British bikes in those days were not much more than glorified candles,” he said.  “They made our races in the San Gabriel foothills quite interesting.”


Brokaw went into the Army in 1953 and was stationed in Texas.  He continued competition riding while in the service and won several Texas state racing titles.  After getting out of the Army, Brokaw moved back to Los Angeles and married Annie, who like Bill was raised in a family-owned motorcycle shop.
The Brokaws ran a motorcycle dealership and began organizing trials competitions.  They formed the Southern California Trials Club, one of, if not the first club of its type in America.  Brokaw won so many of the SCTC events he and Annie put on that he devised a handicap scoring system so other riders would have a chance to win.


By the mid-1960s, Brokaw needed to expand his dealership, but the cost of doing so with real estate prices in Southern California was prohibitive.  His father had moved to Colorado, and when the opportunity to start a dealership in Colorado Springs came up, Brokaw and his family moved there and opened a Yamaha dealership.  In Colorado, Brokaw continued organizing trials. He also won the Colorado Trials State Championship in 1972.


In addition to trials, Brokaw was instrumental in helping arrange a motorcycle division for the famous Pikes Peak Hillclimb.  He also helped write the bylaws of the Sports Riders Association, which focus on motocross racing.


Brokaw ran his dealership until 1992 when he sold the business.  He stayed on working at the new combined dealership for another six years before retiring.  He remained active in the motorcycling community in Colorado and ran a small repair shop.  He and Annie had two daughters, one of whom became one of the country’s leading trials rider in her own right.

​
In 2001 Bill was inducted into the AMA Hall of Fame becoming the third trials rider to join this elite group of famous motorcyclists.  Bernie Schreiber (2000) and Debbie Evans (2003) are the other trials riders so honored.  It is impossible to overstate the prestige associated with this recognition, the highest honor in American motorcycling. 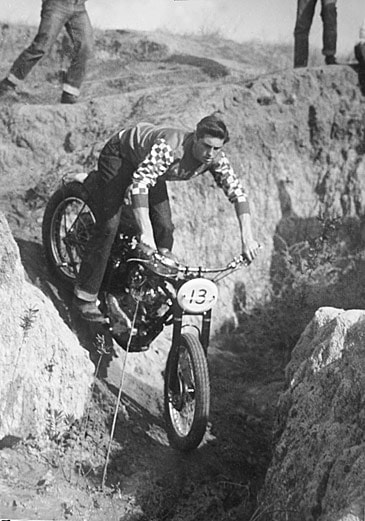