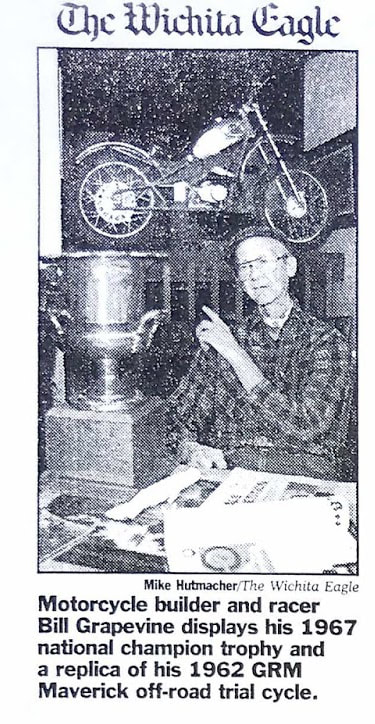 ​Most of William D. (Bill) Grapevine’s life revolved around competing, organizing, designing, building and writing about motorcycles.  Born in 1931 and raised in Wichita during the Great Depression, the scrawny teen earned $5 per bout as a featherweight boxer.  At 19 Bill enlisted in the Navy, trained as a frogman for underwater demolition, became a jet engine mechanic, and coached boxing. While off duty he and fellow sailor Charlie Hill raced in the California desert and organized scrambles on large British bikes and Harleys.  Inspired by Bud Ekins’ tales of motocross in England, Bill organized his first motocross just south of Tijuana, Mexico in 1952.  Two years later he entered his first trial on a borrowed ’47 AJS 350 rigid.

Leaving the Navy in 1955, Bill organized motocross and speedway in Mexico and in the late 50’s road raced a Parilla for Cosmopolitan Motors.  Returning to Mexico in ’61, Bill formed the Equipo Azteca, a three man stunt team with Charlie Hill and Jack Fortney that put on thrill shows in bull rings and ball parks.  Interested in bull fighting, he tried training as a matador.  In 1962 Bill drew blueprints, found 4130 steel tubing in Wichita’s aircraft surplus yards, and built a speedway bike with a Bultaco motor.  Then built “Old No. 1”, his first trials design.  The 175cc Moto Islo powered hard-tail handled well and would reappear in the 1990’s as a winning mount for Dennis Burnett, Jerry Young, Ryan Young and Mick Andrews.

Much to Bill’s surprise, when he and Charlie ordered three 1962 Bultacos directly from the factory, they also received a 155cc Sherpa N with a request to modify it for trials.  Bill did so and won a number of local events.  He also published a 32 page booklet on scrambles titled “Sporting Promotions for Fun and Profit” followed by four years of Cycle Report, a small monthly magazine devoted to trials and motocross.  His editorials often pushed for tougher “European style” events.

Bill created the first of his nimble 150-pound Mavericks in 1963, a year before Sammy Miller developed the Sherpa T.  The double cradle hard-tail frame used an 80cc Fuji motor.  With the availability of Hodaka Ace 90 motors in 1964, three dozen more Mavericks were built over the next few years, all with swing arms.  Bill formed the Pan American Racing Association to further US/Mexican competition and created Aztec Park near Sedan, Kansas, building a nearly mile long motocross course and using rocky stream beds for trials.

In 1965, ’66 and ’67 Bill Grapevine organized three PARA/MICUS National Championship Trials in Sedan, sanctioned by the Motorcycle International Committee of the United States which represented the U.S. at the FIM.  Dabs were counted to a maximum of 25 per section.  In December 1965 37 riders started the 48 mile event containing six 8-mile loops of 7 sections.  Darrel Diersen of Colorado Springs won on a 250 Greeves with 11 points.  Chicago’s John Hill persevered as the 17th and final finisher with 665.  For 1966 Bill lengthened the event to ten 15-mile loops.  By dusk only 5 of the 29 starters had finished the 150 miles.  Darrel Diersen finished tied with Bill Stewart, a 1964 ISDT Silver Medalist from Redwood City, California.  The tie ended the next day in a two hour motocross which Stewart won when Diersen’s plug fouled.  Bill Grapevine won 1967’s two day event over Eddy Evans of Oklahoma, 103 points to 105.

In November 1967 Bill hosted one of the earliest International Motocrosses in this country.  At his Aztec Park course World Champions Joel Robert of Belgium and Torsten Hallman of Sweden, future World Champion Roger DeCoster of Belgium, European Champion Dave Bickers of England, and Swedish riders Ake Jonsson and Staffan Eneqvist easily dominated all the Americans including Glen Vincent and Preston Petty.  Inspired by the Europeans, Bill made a Maverick motocrosser with a 125 Carabela motor and in wet, muddy conditions won 24 races in ’68 and ’69.

After forming Grapevine Racing Motors in 1970, Bill and Charlie Hill, a machinist, took the 125 Carabela powered Maverick to Carabela in Mexico City.  After the company agreed to build 125 and 200cc MX bikes for GRM, Bill and Charlie spent a year there designing, making tooling, and building two prototypes.  Then headed to California with both bikes to seek orders.  Upon returning they were barred from the factory.  Carabela kept Bill’s Maverick and the design drawings, later producing a cheapened version of the 200.  Rather than fight in Mexican courts, Bill abandoned the project.

The next year he met with Moto Islo in Saltillo, Mexico.  They agreed to build the 215cc GRM Trialsmaster as long as it didn’t involve major changes to their engine, an Italian design with a double walled crankcase, four main bearings, a cast iron cylinder and four speeds.  The first few units used Bill’s thin wall 4130 tubing before Islo built hundreds with a heavier “water pipe” frame.  Jerry Young rode his sponsored GRM in the 1973 Ute Cup, the ’74 California World Round and the inaugural Wagner Cup in Rhode Island in ’75.

After GRM collapsed in 1975, Grapevine withdrew from trials ventures until 1986 when he sponsored Ryan Young on an aluminum Maverick trials bicycle at the NORBA National Championship in Durango, Colorado.  In Ryan’s first bicycle trial he finished 2nd to Kevin Norton of California.  Ryan also put on demonstrations at the International Bicycle Trade Show in New York.  Bill’s patent application for his elevated crank design was rejected.

In 1988 Mr. Grapevine had extensive surgery for neck cancer including rearranging some chest muscles to hold his head up plus the insertion of a feeding tube. In 1992, after a long recovery and a sixty pound weight loss, Bill held the first of his ten annual Pastmasters Vintage Trials at the Rocky Ridge Resort near Fredonia.  Each year more “traps” were added to the single line, two day event.  By 2000 Bill had 80 separate sections on the rocky hillsides, gullies and stream beds.  Each class rode two loops of about 50 “assigned by difficulty” sections on Saturday.  Then the start and end gates were swapped for a single reverse loop of 50 on Sunday.  Up to fifty Vintage riders entered each year including former U.S. Champions Curt Comer and Ryan Young.  Former World Champion Mick Andrews of England competed in the final four Pastmasters.  Bill viewed the event as a reunion of old friends with its Saturday night banquet, a 24 to 36 page program, an annual t-shirt, medals, oak plaques, and silver plated bowls and pitchers on walnut pedestals.

In 1995 Bill returned to custom building Maverick trials bikes, all hard-tails, using the original welding jig from the early 60’s.  Larry Bowers, the original welder, welded the 8 or 10 ordered in the mid to late 90’s.  Fuji, Hodaka, Bultaco, Ossa and RTX (Russian) engines were fitted along with tapered roller steering head bearings and a custom aluminum gas tank nestled under the top tube. Some even had dual brake pedals.

Part American Indian, Bill Grapevine was testing a Maverick at Rocky Ridge in ’96 when he crashed after hitting a hidden beaver stump, cracking a neck vertebra and temporarily paralyzing all four limbs.  Alone and helpless for hours, he thought he heard a tractor and tried to shout.  At that very moment two passing canoeists heard his noise and found him.  Bill gradually recovered, organized the last five Pastmasters and built three additional Maverick frames, this time for Triumph Cub engines.

This scrawny but determined featherweight finally lost a bout . . . . to recurring cancer in December 2003. 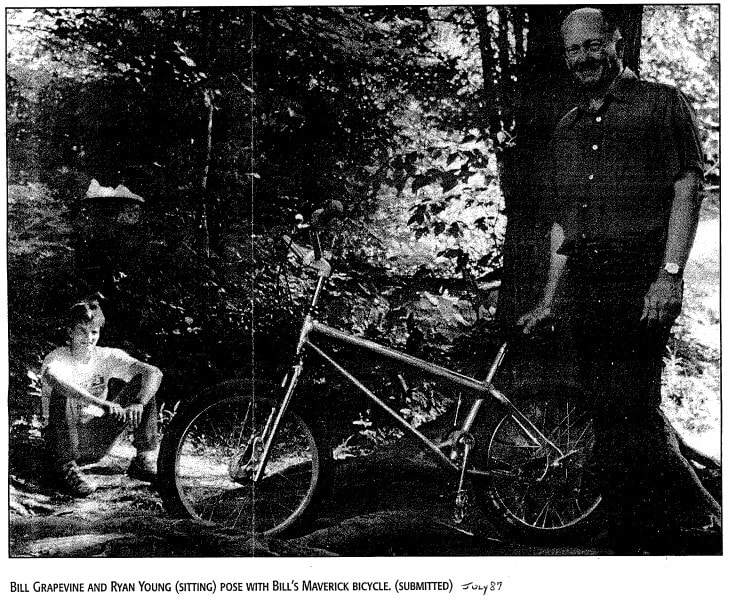