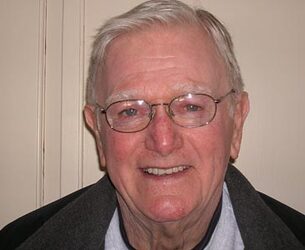 William Mathewson of Hope Valley, Rhode Island, was born on July 17, 1935 in Providence, Rhode Island.  Bill began his observed trials riding career in 1969 as a member of the Rhody Rovers Motorcycle Club and the New England Trials Association (NETA).  During the 1970’s he finished among the Top Ten riders in the NETA series of trials competition and was recognized for his ability as an organizer of NETA events.  Bill, always the serious competitor and organizer, had an uncanny sense of humor that was often times mischievous in nature and contagious for those within earshot.  A man of continuous energy and desire to assist others, Bill traveled across the state and the nation assisting others in organizing events, serving for several years as the NATC Safety Steward.  With a long history as a motorcycle enthusiast, Harley Davidson rider, and mechanic, Bill brought enthusiasm, experience, and knowledge to his participation in observed trials.


In 1974 as the NATC/AMA National Observed Trials Series began, Bill was one of the key organizers of the National held in Rhode Island that first year.  Bill competed in all the national events during that year and for several years to follow, spending countless days driving across the country to attend events.  He was clearly one of the leaders in persuading many New England riders to participate in the National Series during the 1970’s and ‘80’s.


In 1975 the FIM, through the AMA, awarded the United States the opportunity to hold one observed trials event as part of the World Round Series.  The NETA / Rhody Rovers M/C were selected by the NATC/AMA as the host organization for the event.  The NATC made the selection based on the organization, section set-up expertise, and the overall enthusiasm demonstrated in hosting the 1974 National event.  Bill Mathewson was a prominent and key member of that “first to be held in the United States World Round”, the 1975 Wagner Cup.  Bill continued to ride and organize local and national series events during the next ten years; in 1985, he was again a prominent figure in the highly successful 10th Anniversary Wagner Cup held again in Rhode Island.