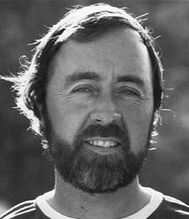 Bob Nickelsen started trials in the late 1960’s. Twice he became the Southern California Champion.  Trips to Spain to compete followed winning El Trial de España.  With this high-level skill and experience, he finished second behind Lane Leavitt at the pioneering North American Trials Champion in 1972.  The next year, at the infamous mud trials in Saddleback Park, California, the first official American appearance of the European riders, everyone was hopelessly late. Nearly all the best riders in the world were disqualified.  Bob, ever the crafty one, realized the time disaster and used his intimate knowledge of Saddleback to speed to the finish line, finishing 10th, the last one to avoid disqualification.


That accomplishment was on one of the early, woefully under powered Honda TL-125 trials bikes, making the feat even more remarkable.  Representatives from the Honda factory were there and offered Bob the opportunity to organize a Honda trials team to compete at the US nationals.


This was a pinnacle achievement for Bob.  The hand-made Hondas were amazing and attracted endless admiration.  The Honda riders dominated the nationals: Marland Whaley the champion, Mark Eggar usually a close second, and the rest of the team occupying the top spots.  Bob was the coach, and the first minder anywhere.  In all the rides in all the six years of national competition, there was not a single failure of any of the Hondas.  Bob, the crew chief, and tuner-mechanic extraordinaire.


Bob continued with Honda for 23 years.  Predictably he had interesting jobs such as dynamometer emissions testing and as Automotive Senior Engineer Specialist, the one who travelled to dealers when they could not fix the worst of computer or electronics problems.  As with everything else, troubleshooting was fun, trials was fun (the training and training and practicing was more fun than competing), mountain bike racing was fun, and now in retirement, riding quads in the snow-bound high altitudes around Prescott Arizona is great fun.  All these years later, he recently sent in an engineering report to the factory on one of the 2010 Honda quads.  Not surprisingly, all eleven design problems got their attention and all were fixed on the 2011 model.


His travels with Honda, with trials, and with the military have taken him all over the world.  In fact his world tour with the military put him on the front lines with electronic bombing beacons, the ancient predecessors of the GPS.  And this a biscuit toss from the front line of the Russians.
One of Bob’s hidden characteristics has been amazing toughness and self reliance.  Much of that came from moving every two years with his Navy father. Always the new kid, always the outsider.  His toughness was truly forged when he went to high school in Washington, D.C. where he might see another white face three times in a week.  Fights every day after school.  His strategy was not to win, but to cause as much pain as he could to his attacker.  Result: iron turns to steel, and fewer and fewer fights.  He commented once that the muscled top trials riders strutting shirtless around the pits were a joke.

​
Bob was extraordinarily generous to many people, but he did this in a personal, private way few knew of.  Bob was also an inspirational competitor, the high water mark for anyone to chase.  And tough?  The first chest pain came during a mountain bike race.  But his race face was there and he finished.  Now, years later, and sixteen heart attacks later, Bob still loves life, rides every day, every minute fun for this one-of-a-kind man.
Contact Us | Privacy Policy
All Photos © Stephanie Vetterly unless otherwise noted.
© MotoTrials USA Championship