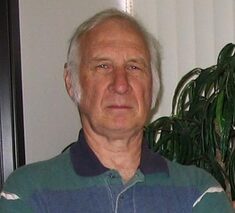 
The next year he bought an Ossa and that began a life-long affair with trials, an avocation likely unmatched for consistency and devotion.  In his upstate New York, an area rivaling any in the country for superb trials terrain, he only missed two events in the following 30+ years.  On several occasions he was ranked number one.


The 1992 World Round was considered the best FIM event of the year.  In a tour de force, the TDN was set on that same weekend.  Carl and his wife Nancy, the one who brought order to the chaos at all these events, shared the 1992 AMA Sportsman of the Year Award.


As the creator of the Gate Scoring System, he has continued to refine this alternate scoring method.  He was a steady attendee as an NATC club representative, then as an NATC Diplomat, and a as member of the Board of Directors.


His most famous and oft repeated statement during one of the many heated debates at Council meetings was, “Trials isn’t supposed to be fun.”  The true meaning of this pronouncement has continually eluded the best minds on the Council, but it is likely a masquerade as a tough guy from one with such true passion for trials.  Carl’s summary, “Nothing I did resulted in any shootings, stabbings, jail, or hospital time – probably as good as it gets,” another mysterious commentary from this extraordinary man.
3-Time Class Champion