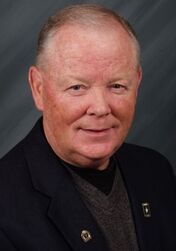 Dave Russell of Pascoag, Rhode Island, was born on January 21, 1947. He began riding observed trials in 1967 as a member of the Rhody Rovers motorcycle Club and the New England Trials Association (NETA).  Rising from Novice to Expert class in one season, Dave finished among the Top Ten riders in New England for several years in the 1970’s.  In 1970 Dave won the High Point award at the first long distance trials held in New England (Nipmuc Scottish Trial) besting the NETA Champion for that year as well as several former NETA Champions on a 1969 Cotton 175 cc motorcycle.


Early in the 1969-1970 season, Dave joined a handful of Rhode Island’s long time off-road riders in reorganizing the Rhody Rovers Motorcycle Club into one of New England’s prominent trials and enduro organizing clubs. With the reorganization, Dave became club secretary and then Club President from 1972-1977 overseeing up to a dozen events each year to include NETA observed trials, club events, a New England Trail Riders Association Enduro (NETRA), NATC National Rounds, and the 1975 “first to be held in the United States World Round”; the 1975 Wagner Cup. During this same time period, Dave became Secretary/Treasurer and Chairman of the NETA rewriting the NETA rule book and separating the NETA from the New England Sports Committee making the NETA a completely separate organization.


In 1974 Dave attended his first NATC meeting at AMA headquarters and introduced a set of rules for the upcoming national series, some of which were incorporated into the original NATC rules among those of other contributors.  1974 also saw the NETA and the Rhody Rovers as a host club for an inaugural National Round, at the end of the series the Rhode Island event was noted for over all organization and trials section set up.  Dave rode in all of the national rounds for many years traveling across the country many times until his retirement from trials in 1991.


1975 saw the FIM awarding the United States through the AMA a World Round.  Dave was selected by the NATC to be the Clerk of the Course for this first Wagner Cup event to be hosted by the NETA and the Rhody Rovers M/C. Dave’s selection as Clerk of the Course was confirmed by the NETA and Rhody Rover membership.  The event was considered an overwhelming success by the World Championship riders who rated the event as best event for 1975.  Dave also served as the Clerk of the Course for the 10th Anniversary Wagner Cup event in 1985.  He was selected as a NATC Diplomat and continued to attend NATC meetings for 35 years at the time of this writing.  In the mid 1970’s Dave introduced a formula for determining the time required to run a national round, and the formula was used for many years by clubs hosting national events.