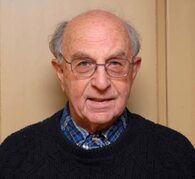 Larry Wise has an unparalleled motorcycling pedigree.  Starting with his grandfather in 1922, who began selling JAWA motorcycles in Hungary, the Wise family has been in the import business for nearly 90 years.  First his father and he imported JAWA, Zundapp, Parilla, MV, Bimota and then Benelli scooters and motorcycles here in the U.S.  The Wise-owned Cosmopolitan Motors flourished and also imported many 100 MPG+ scooters and mopeds, selling them as fast as they could get them.


Many well known riders have been sponsored by Larry’s Cosmopolitan Motors.  Eraldo Farracci, the Italian National Road Race Champion came from the Benelli factory to Cosmo in the USA in the mid 1960’s and set national motorcycle drag race records, one by going over 100 MPH on a 200 cc Benelli. Eraldo’s Fast by Farracci went on to be the builder and crew chief for the Ducati many-time U.S. and World Champion Road Race Team.


Larry began importing Montesas in 1975 and inherited the sponsorship of Don Sweet.  Sweet tried to explain on the telephone what trials was about.  Finally he traveled to Cosmo to demonstrate the sport.  Larry was so impressed with the smoothness and grace of the riding that, at age 45, he took a 247 cc Montesa to a local trial.  Somehow trials was not as easy as Sweet made it look.  Larry’s trials career lasted a total of 10 minutes.


Cosmo imported Beta as well, and supported many riders through the years including 10-times NATC national trials champion, Geoff Aaron, many time NATC champion Ryan Young, his father Jerry Young, Ron Commo Jr., and many others.  Larry was a member of the NATC from its inception and contributed greatly to the growth and stability of the sport.


Through his early experience of trying to import European motorcycles he met resistance by the Harley/Indian faction.  They were renowned for their disdain of foreign brands.  Eventually Cosmo was invited to join the AMA board along with Triumph, BSA and BMW.  Larry became the secretary of the board in 68, 69 and 70.  He was there when the board hired Ed Youngblood to be the CEO.  Youngblood was a crucial trials supporter and sponsored the second meeting of the Council, held at AMA headquarters.  Without that executive decision, the fledgling Council would have suffered a major setback.  Of course the reversal of the board’s prejudice against imported motorcycles set the stage for the rich imports of foreign made bikes over the last decades, including all trials brands.


Larry Wise met Annie Frazine at Daytona in 1952 when Steffan Heckert came from the German factory to demonstrate how their new Zundapp motorcycle would be able to ride in water with its revolutionary new high pipes.  The demonstration went well for a while until the motor died.  It was also thoroughly stuck in the mud.  Try as he might this factory rider could not get it out of the mud.  As Larry recalls, “A beautiful tall 15-year-old girl went out to help him.  She was so strong that she pulled the bike out of the mud, practically by herself, somewhat to the embarrassment of the famous factory rider.  The girl would later become Annie Brokaw and Larry, who seems to know everyone in motorcycling, knew Annie probably before Bill had ever met her.


It is little known, but Larry attended the Milan and Cologne Expos in Europe every year.  These are huge shows attract 600,000, compared to 20,000 visitors who go to the U.S. Expo.  When he attended with Ron Commo Sr., Ron was amazed and impressed with Larry’s international reputation and the level of respect he garnered.  Lest the brief trials career give the wrong impression of the toughness of Mr. Wise, Commo relates the following story.  “Five days before Larry and I were due to fly to Europe, his secretary called and informed me that Larry was in the hospital for yet another clogged coronary artery.  Naturally I assumed the trip is off.  But she said, Larry wants to see how things would go.  Sunday night Mr. Larry called from the hospital.  He said he would get out on Monday. If I could pick him up at Cosmo, he would be ready to go, but I would have to carry the briefcase and do the driving.  Two days after having a stint shoved up his leg into the clogged coronary artery, we went to Europe.  We put in eight hour days at the show for three full days and even visited the first day of Oktoberfest.  He never showed a single sign of being tired.”  His strong advice to the amazed Ron was “In business never show weakness.”
​

Larry had proved again that this modest gentleman, the one the trials community knows, was quietly and extraordinarily tough and enjoyed an international reputation as a well-respected gentleman. 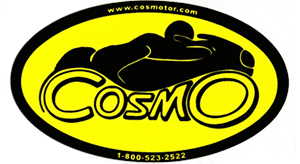 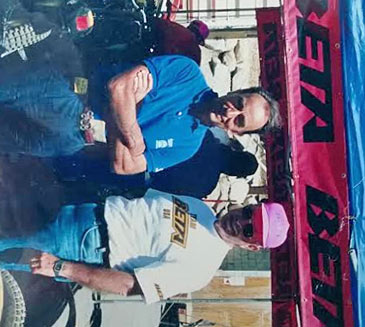 Via email from Larry  “This picture is on its side and I couldn’t figure out how to turn it vertical (that’s the same problem I had with my Cota 242 in 1975 when I tried to ride trials).”
Contact Us | Privacy Policy
All Photos © Stephanie Vetterly unless otherwise noted.
© MotoTrials USA Championship