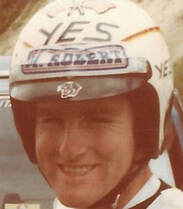 A native of California, Scott rode his first local trial at age 14.   His skills quickly progressed and just 3 years later he was #8 in the nation.

1980 was a relatively short season (best 4 out of 6 rounds) so every round was critical to the final standings.  At the last event of the year there were five riders (Kavanaugh, Skreen, Leavitt, Head and Comer) within 6 points of clinching the number two spot.   Scott was able to lock up the series 2nd overall by finishing second on the day.
​
1981 and '82 were largely spent in Europe riding in the Italian and World Championship rounds.  While injuries impacted his 1981 season he came back strong in 1982 and finished 13th in the world.  As of 2021, he is the last US-based American rider to earn World Round premier class championship points.  He also rode the 1982 SSDT finishing 18th overall and earning a First Class Award.  He also won the Ben Nevis Challenge Trophy for the second best performance by a competitor who has never previously ridden the SSDT.

Unlike most US riders that go to Europe, Scott adapted well and enjoyed his time overseas.  If his 1983 ride situation had been a little different he likely would have stayed there.  Instead he was back in the States and focused mostly on work and his college studies and as a result he was only able to ride some of the US Nationals finishing 7th overall.

Three in a row - putting all his European experiences to work along with a regimen of strength training and running he earned the US National Championship titles in 1984, 1985 and 1986.  During that time period he won a record 16 nationals in a row and swept the 1985 series by winning all nine rounds.  His record win streak stood for 33 years only being broken in 2019.

Learn more about Scott by listening to his interview on the Trials Australia Podcast.
Contact Us | Privacy Policy
All Photos © Stephanie Vetterly unless otherwise noted.
© MotoTrials USA Championship