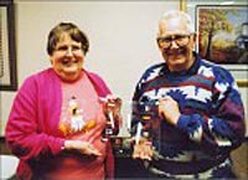 One thing you should know is that Wick didn’t have hobbies; he has obsessions and usually managed to drag me – kicking and screaming – into involvement with him.


Our motorcycle involvement began in 1968 when our 15 year old son wanted to buy a used motorcycle with his summer earnings.  My immediate reaction was “over my dead body”.  Wick agreed, said he would test ride it to find something wrong and that would be the end of that.  Forty-five minutes later, I was admiring the first of many motorcycles to come to our garage.


Needing a place to ride legally, Wick became a charter member of the Liberty Missouri Chargers and spent the next several years involved in motocross activities in Missouri and Kansas.  Wick was doing photography and I was scoring and writing for several cycle newspapers.


In 1972, the Montesa factory sent the owner’s son and English factory rider Rob Edwards to the U.S. to promote trials and the Liberty Chargers were able to get them for a weekend school and event.  It was one of our involved weekends, our son had a very important motocross race on Sunday and I was scoring.  I had been drafted for Saturday chores for the Chargers and on my last trip of the day I was greeted at the gate by a strange talking “bloke” who stuck his hand in the window and said, “Hi, I’m Rob Edwards, understand we are having dinner at your house tomorrow night”.  I could only sputter and Wick and our daughter said it only took one look at my face and I knew about their invitation.


I hadn’t planned on cooking that weekend and the pantry was bare and I don’t like to recall the state the house was in.  Detour by the grocery on the way home, and then go into overdrive to at least make the downstairs area presentable for sitting and dining.


Arrived home later from the motocross to find the guest list has increased by three.  Oh well, they’ll eat and leave just as they had done the night before at another member’s house.  Alas, Rob arrived with a trunk full of trials movies and the guys wanted to watch every one.  At 3:00 am. Everyone agreed to meet in Edinburgh, Scotland in May 1973 for the Scottish Six Day Trial and Wick was totally hooked on trials competition.  For me it was the start of feeding and housing riders through the years.


We did make it to Scotland and it was the beginning of Wick’s 23 year love affair with the SSDT.  Along the way we became the first non-British to be accepted as a members of the organizing club and Wick was the first non-Brit to become an official Observer at the SSDT.  We were also very honored to become the 5th and 6th people to be voted “Honorary Life Members” of the Edinburgh & District Motor Club.


In the States we attended as many National and local events as possible and Wick continued to pioneer photography for events, both still and video.  He produced the first “How to Observe” video and was always available as an observer at any event.


In 1984 the NATC was challenged to field a team for the first Trials de Nations to be held in Poland the next year. Charles West (TN) was appointed Team Manager and I was appointed Fund Raiser.  It was an interesting year, traveling to most of the nationals, hauling all sorts of items to sell, asking for donations and starting a fund raising mail order business.  We didn’t make enough to cover all of the TdN expenses but with dealer donations and very creative packing (disassembled motorcycles packed into bags and checked as luggage) we managed to field a three rider team.  We learned a lot about dealing with customs and Iron Curtain bureaucracy.  We had been very fortunate to make contact with a Polish trials enthusiast, Jack Gochowski, and he really guided us through all of our problems and made many arrangements for accommodations and transportation for us.  Jack would continue to be of help to the U.S. Team at future events.


Two years later I was appointed Team Manager as well as Fund Raiser and Wick became Business Manager and driver of the “Great White Whale” (our home away from home) for most of the year.  We held those positions for 12 years until retiring and handing the reins to Martin Belair.  We were very proud that the U.S. has fielded a TdN Team every year since its inception.


Because of Wicks job, we moved several times over the years and held memberships in several trials clubs.  Besides the Liberty Chargers, Wick was a charter member of MATT and also active in the NTTA, RMTA and STRA organizations.


Even though Wick has passed away, I still keep in touch with several of our trials friends throughout the year.  Trials and motorcycles will always be a part of our life.
​
​
Thanks to everyone for a lifetime of enjoyment and for honoring us with our induction into the NATC Hall of Fame.
Contact Us | Privacy Policy
All Photos (c) Shan Moore unless otherwise noted.
© MotoTrials USA Championship