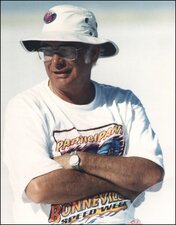 Wiltz Wagner, who started his motorcycling at 28 years of age, was destined to put an important imprint on the sport of observed trials. He started in 1967, and we might imagine the bike would simply be for relief from the pressures of his vocation, medical research; but as the years would prove, Wiltz seemed to thrive on the pressures of making something happen. This drive would shape motorcycle trials sport in America for decades to come and the end is not in sight.

​
His first bike, oddly enough, was a trials bike, and the following year he would be tasting competition near Denver, Colorado. These were events put on by an individual without the benefit of a real organization. Within months, Wiltz’ fertile brain was imagining an organization for Colorado that would be unique among motorcycle clubs. (Not that he would know what any other club was like!) So Wiltz huddled with another organizer, Jon Callihan, and the most experienced rider available, Bill Brokaw, and laid out his ideas for discussion. Brokaw had organized the Southern California Trials Club, but the organization that would blossom from this meeting would be very different. The Rocky Mountain Trials Association (RMTA) was born without a vote and to this day operates sans any voting in the organization. Purposefully, Wiltz had envisioned a club where experimentation would be welcome, but with certain other core beliefs so strong that they survive to this day. The high elevation Ute Cup Trial, with all awards centered on the Indian heritage, was his concept, as well as the style of all awards within the RMTA. The current Steering Committee is merely an expansion of his original management plan.


Wiltz’ record as a competitor showcases his enjoyment of trials and his determination. His rapid rise as a trials rider is rarely duplicated by anyone who starts riding at such a late age. By 1970 he was able to win the Conquistador Challenge Trial. The 1973 Ute Cup first-day results had Wiltz in the lead over none other than Sammy Miller, Lane Leavitt, and Bob Nickelsen. From 1970 through 1986 Wiltz earned 15 Ute Cup medals. The Scottish Six Days beckoned in 1974 where a First Class Award was earned. Wiltz was the most consistent competitor in the RMTA, going years on end without missing an event. He always competed at the highest level in the RMTA with good results. He collected the Senior Challenge Cup three times in his later years of RMTA competition.


Over the next fifteen years he would teach dozens of trials schools, showing his patience and desire to help others achieve the pleasures he had enjoyed. In 1972 he would co-author the learn-to-ride book “Escape by Trail Bike”, teaching the beneficial use of trials techniques for everyday trail riding.


Soon after the RMTA was established, Wiltz attended self-proclaimed national championship trials and an international event. He quickly ascertained that purely local knowledge was not adequate to produce quality championship events. Recognizing this and doing nothing about it would not be his nature. So in 1973 he organized a meeting of a number of known trials organizers who, along with Mick Andrews, met at the Yamaha distributor’s offices in Los Angeles. The initial concept of the North American Trials Council (NATC) was hammered out and set in motion. The goal was to create a quality American championship series and prepare riders for international competition. The process was to have the series organized and overseen by the trials community. It was vital that the council be linked to the American Motorcyclist Association (AMA) and thus linked to world competition. No other branch of motorcycle sport has the specialists of a discipline calling the shots and establishing their series under the AMA. Thus the NATC was born. This utterly unique, successful, and harmonious arrangement was largely designed and brokered by Wiltz.


Wiltz brought his vision of a non-voting council of North America’s trials organizers to the national and ultimately international scene. Wiltz was recognized as the logical leader of the council from the start. His chairmanship was never questioned through 2002 when he himself orchestrated his relinquishing the reins of the council, though he remains as the Chief Financial Officer. Through many lean years Wiltz underwrote the financial requirements of the council. His dedication to the goals of the council and the series were contagious. A large and solid core of council members have worked tirelessly to produce a national series of exceptional quality. Recognizing his contribution to the sport, the council named America’s rounds of the World Championship Series the “Wagner Cup”. This recognition came in 1975 with the first series event to come to America under guidance of NATC/AMA.


With Wiltz’ influence, the RMTA became the most active club in promoting national trials. He was Clerk of the Course for the 1977 Colorado round which was voted best trial, an action repeated in 1984. This success primed him to put on the world round for 1979. This event showcased his bulldog determination as no other had. Bucking widespread apprehension by most in the RMTA, he gathered a small and dedicated group, gained the blessings of the NATC, and proceeded to organize a successful event, converting the naysayers along the way. The challenges peaked when the zoning board, which had to give a variance for this single day, tabled their decision to within two weeks of the event, an impossible situation. Wiltz found a way to override this action and gain government approval at that 11th hour.


The national series was actively pursued by Wiltz the competitor. In 1979 he became the National Senior Trials Champion. (35 years and older), and from 1977 through 1985 his count of senior class wins grew to 19.


In 1985 Wiltz made the move to Indiana to further his work in medical research. This put him in a place where the nearest trials competition was too distant for the on-any-Sunday events. The difficulty in maintaining his competitive edge finally ended his trials competition in 1989. But two other aspects of motorcycle sport were not out of reach.


While In Colorado Wiltz had found a winter use for his trials bike in bare tire ice racing. His studied manner soon had him challenging for wins in this new sport. With other friends from the trials world to bang bars with, his enthusiasm survived his move and lead him to four championships in Michigan’s AMA District 14. He retired from racing in 2004.


The call of the Bonneville Salt Flats, and breaking records with smaller engined motorcycles, caught him in 1987. Engineering record setters in his garage shop, with some help from his friends, he planted the ladies of his family on his creations and sent them off toward the distant horizon to establish, so far, 1 AMA, 2 FIM, and 34 SCTA records. His contribution to the movie, “A Lazy Man’s Zen”, about this activity, is obvious to any viewer.
​

As of 2005, when this is written, Wiltz is still active in the NATC and attends America’s rounds of the world trials championship as the Environmental Officer of the Fédération Internationale de Motorcyclisme. It is clear that, of the many who have left their mark on the trials sport in America, none have shaped the sport on a national level to the extent that Wiltz Wagner has.
Contact Us | Privacy Policy
All Photos © Stephanie Vetterly unless otherwise noted.
© MotoTrials USA Championship