Geoff Aaron Achievement Award
​From a riders standpoint the top honor of the year goes to the top rider of the year and this is the winner of the top class, now known as the Pro class. The award given to the #1 rider has been named the Geoff Aaron Achievement Award (GAAA) named for Geoff Aaron who was our #1 rider for an incredible 10 times between the years 1994 and 2006. It is highly doubtful that anyone can top this feat–only time will tell! To honor the national champion each year we decided to give them a trophy that lists all of the previous year’s winners and you can see a picture of one below.
​ 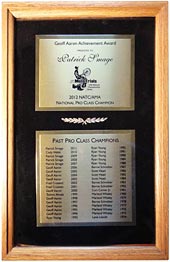 Diplomat
The highest honor the NATC bestows on a trial organizer is that of diplomat status. Diplomats of the NATC are those individuals that have led their clubs in hosting a FIM sanctioned world trial event in the US. These events have now been named after Wiltz Wagner and called the “Wagner Cup.”  Here is a list of the diplomats but we still need pictures for some. Beyond this recognition, Diplomats are further rewarded by being invited, expenses paid, to the annual NATC meeting and serve as members of the board of directors of NATC, Inc.
​Wagner Cup
The Wagner Cup is presented to the winner of the two-day US “Grand Prix” FIM-sanctioned world round events held in the US. Here is a list of the Wagner Cup events and winners. Here is a picture of the Wagner Cup which is kept at the AMA Motorcycle Hall of Fame and gets the name of each winner inscribed upon it. 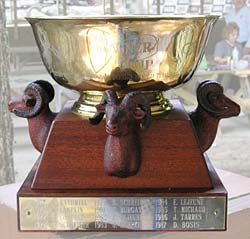 Best National
Riders send in opinions each year about how they judge each national and a vote for best national results in an annual award presented at the council meeting to the representative of the organizing club.

Friends of the NATC
This award is not always given out but is given to recognize a tremendous effort of dedication to the US series and is usually given to one who has not achieved any recognition in other respects but has helped the NATC accomplish its annual mission. The list of recipients with a short description of the reason for the recognition is under development.

AMA Awards
Geoff Aaron received the Athlete of The Year Award from the AMA. In 2009 the NATC was awarded the AMA Off Road Organizer of the Year award. The NATC received the award thanks to the hard work of the many volunteers and the event organizing clubs and its volunteers.

Hall of Fame
Last, but certainly not least, is the Hall of Fame recognition which may be given to someone who may not ever have attended an NATC meeting but whose accomplishments have been instrumental to the success of the US national series. Learn more by clicking here.
Contact Us | Privacy Policy
All Photos © Stephanie Vetterly unless otherwise noted.
© MotoTrials USA Championship